Hello. We are a multi-BAFTA winning, multi-EMMY awarded and OSCAR-nominated independent animation studio. We’re known internationally for our idiosyncratic and innovative work, expressed across an eclectic range of projects.

Our close-knit team includes directors, designers, animators, writers, technical artists, and producers who create and consult on projects with a strong emphasis on story, design, and character. We both originate projects and work to commission, from commercials and title sequences to short films, documentary and drama sequences, and our original tv series. With a focus on accomplished design & craft, compelling ideas, and uncompromising attention to quality & detail, the studio houses a group of directors/designers who are constantly looking for novel ways to tell stories.

The wide range of work we produce together is a testament to our ability to reinvent ourselves and our willingness to explore new things —from the apocalyptic title sequence for Ridley Scott’s HBO Max series RAISED BY WOLVES to our worldwide hit pre-school show HEY DUGGEE. 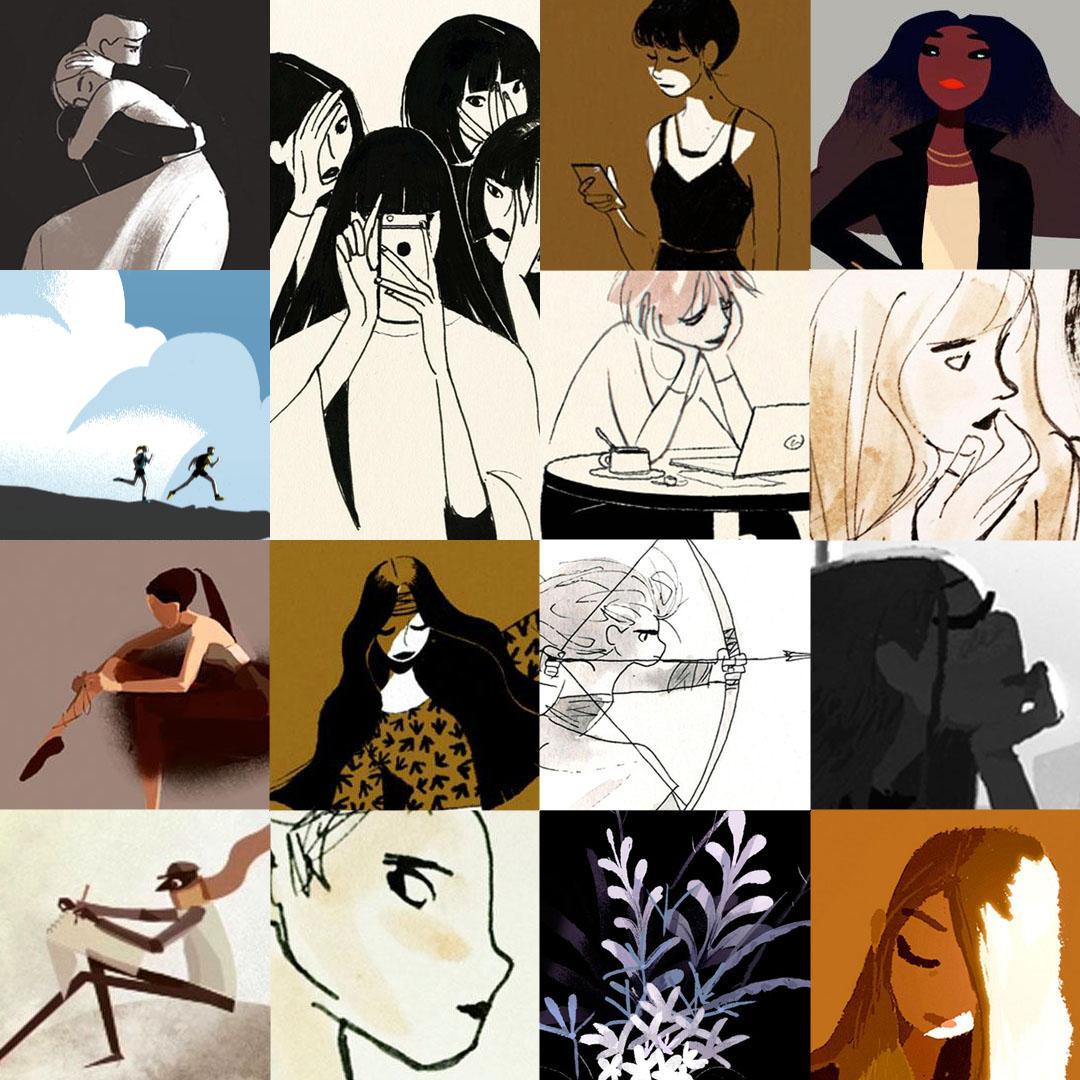 Manddy’s bold compositions and contrast create vibrant, atmospheric backgrounds, and her characters are drawn in an elegant line or a sharp edge, capturing attitude and personality in a few powerfully graceful strokes. Her recent work with AKA includes Art Direction on the EMMY winning HERE WE ARE, designing on NATURNES & SAN PELLIGRINO, and directing on spots for ON and BELLFAIRE. Go take a look at Manddy’s Instagram for some visual awesomeness… 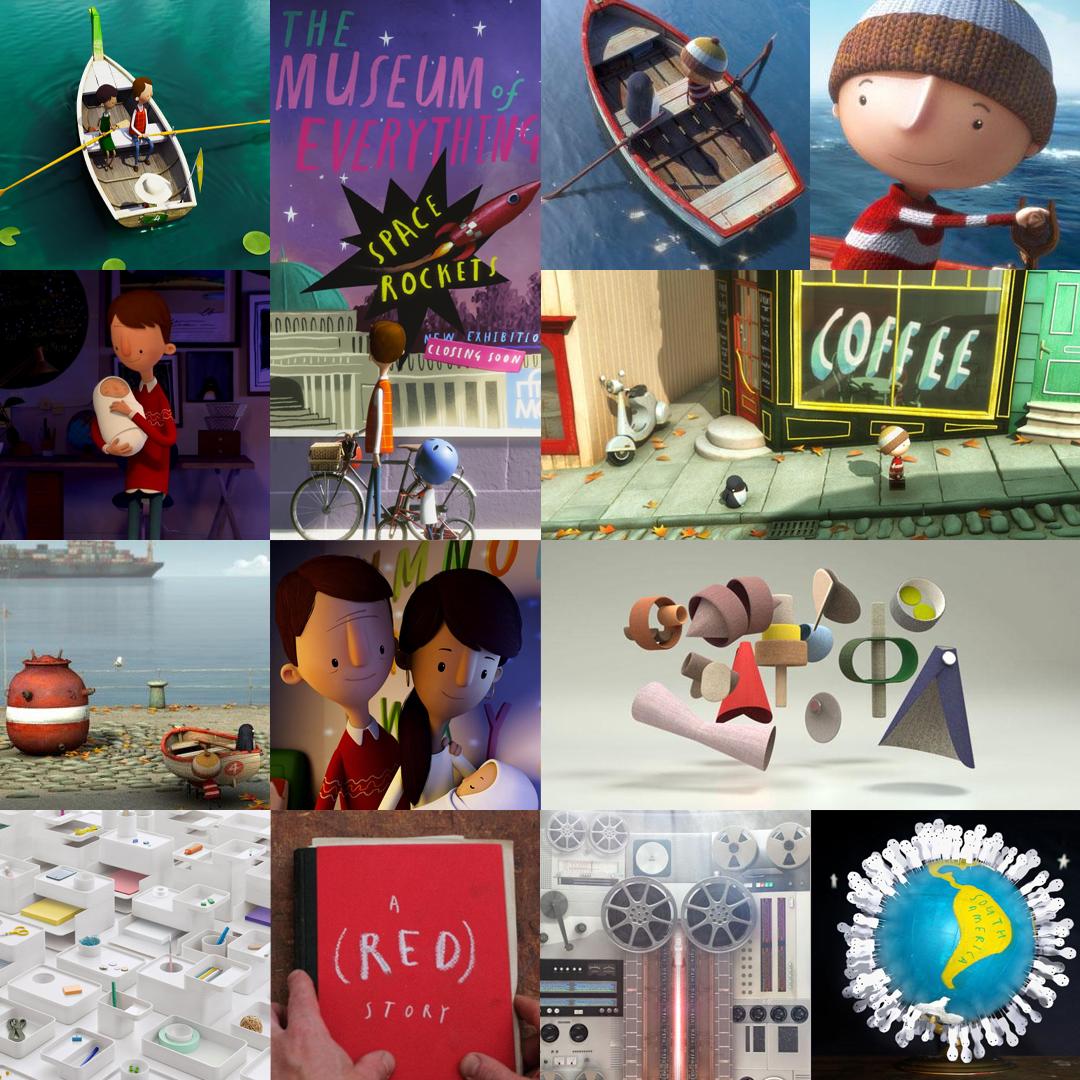 Philip’s diverse body of directing work spans an eclectic range of animation projects, including the EMMY-winning ‘HERE WE ARE: NOTES FOR LIVING ON PLANET EARTH’ —a half-hour animated adaptation of the best-selling book by Oliver Jeffers for Apple tv+; featuring the voices of Meryl Streep, Chris O’Dowd, Jacob Tremblay and Ruth Negga. Philip’s previous collaboration with Jeffers was the BAFTA (& 61 international awards) winning children’s film LOST AND FOUND, narrated by Jim Broadbent and featuring a score by Max Richter. Alongside this, his work includes the multi-award winning short film AH POOK IS HERE – an interpretation of recordings by William s. Burroughs and commissioned projects for BMW, Kradvat, Herman Miller, One.org and (RED).org.

An alumnus of both Central St. Martins & the Royal College of Art, Philip is an advisory board member of the FMX & ITFF festivals and a visiting tutor at the Filmakademie Animation Institute in Stuttgart. As a longtime faculty member of the Pictoplasma Academy in Berlin, he teaches idea & story development and is a regular speaker at countless festivals & design conferences, including Pictoplasma / Styleframes NYC / Broad.cat / Playgrounds / Onedotzero / Offset / FMX / The Story London / Semi-permanent & many more.

■Here We Are  ■Lost And Found  ■KVADRAT 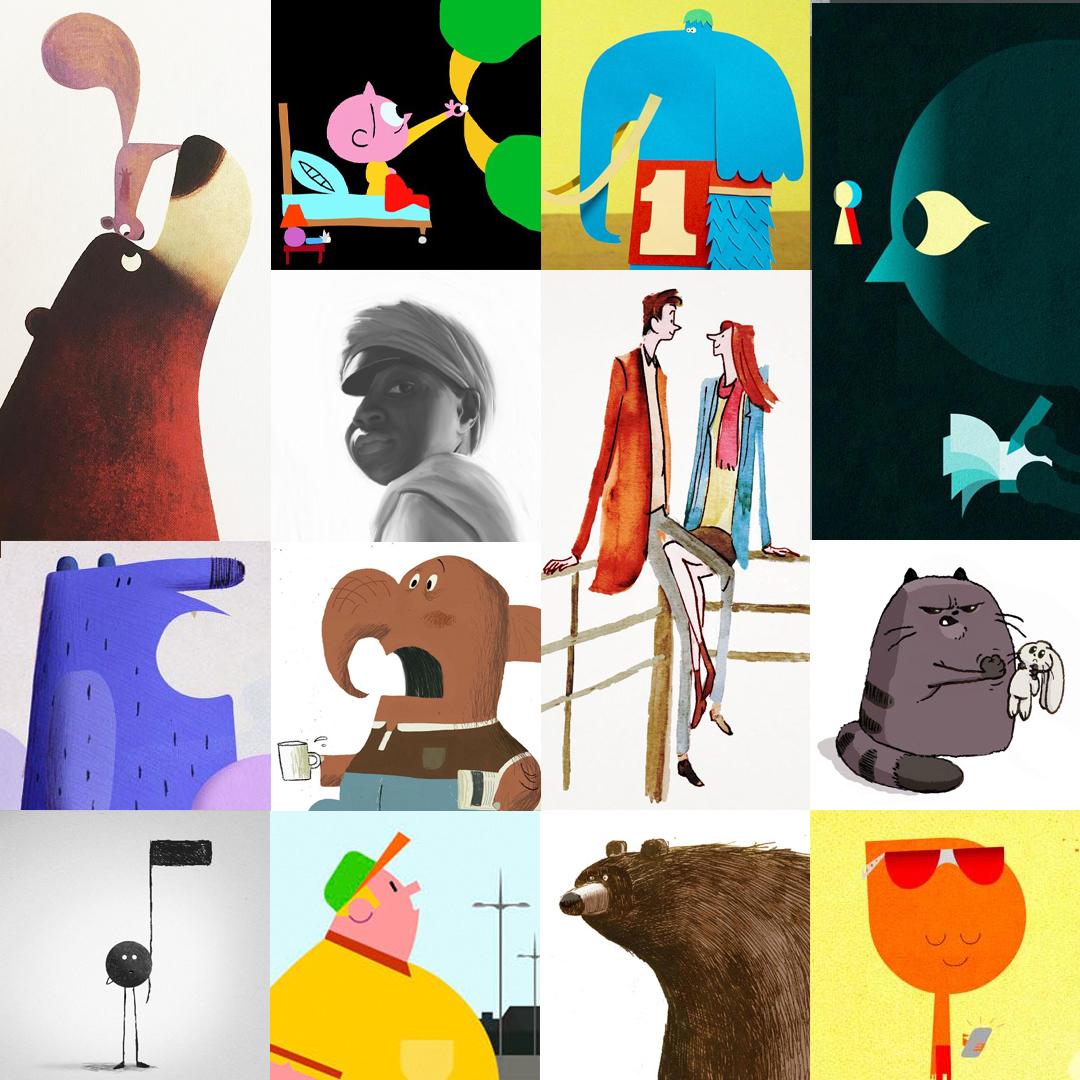 BAFTA & Emmy-nominated Director Steve Small is a master craftsman & artist. His work has varied from working on Disney features to designing and directing shorts, TV series, and commercials. Steve has directed and animated a formidable slate of commercials at AKA, including spots for TELE2, NICKTOONS, ORANGE, TSB, ADMIRAL and the utterly charming SING UP.

More recently, Steve has been developing animation for more adult themes, beginning with a series of BAFTA-nominated animated sequences for the BBC Netflix drama BLACK EARTH RISING and moving onto to an Emmy Nominated title sequence for Ridley Scott’s Sci-fi series RAISED BY WOLVES, and a title sequence and inserts for Jake Scott’s documentary KIPCHOGE.

In Steve’s alternate universe, he has also embarked on a career of illustrating and writing for children’s picture books. The first book, which Steve illustrated, ‘I’M STICKING WITH YOU,’ was nominated for a Nibbie, a book Oscar, and the Klaus Flugge award, winning a Silver at the Junior design awards and an honorary mention at the Ezra Keats awards. Steve has followed this up with THE DUCK WHO DIDN’T LIKE WATER, which he both wrote & illustrated. Steve lives in London, and when he’s not painting and drawing, you’ll likely find him feeding the crows on Blackheath Common. 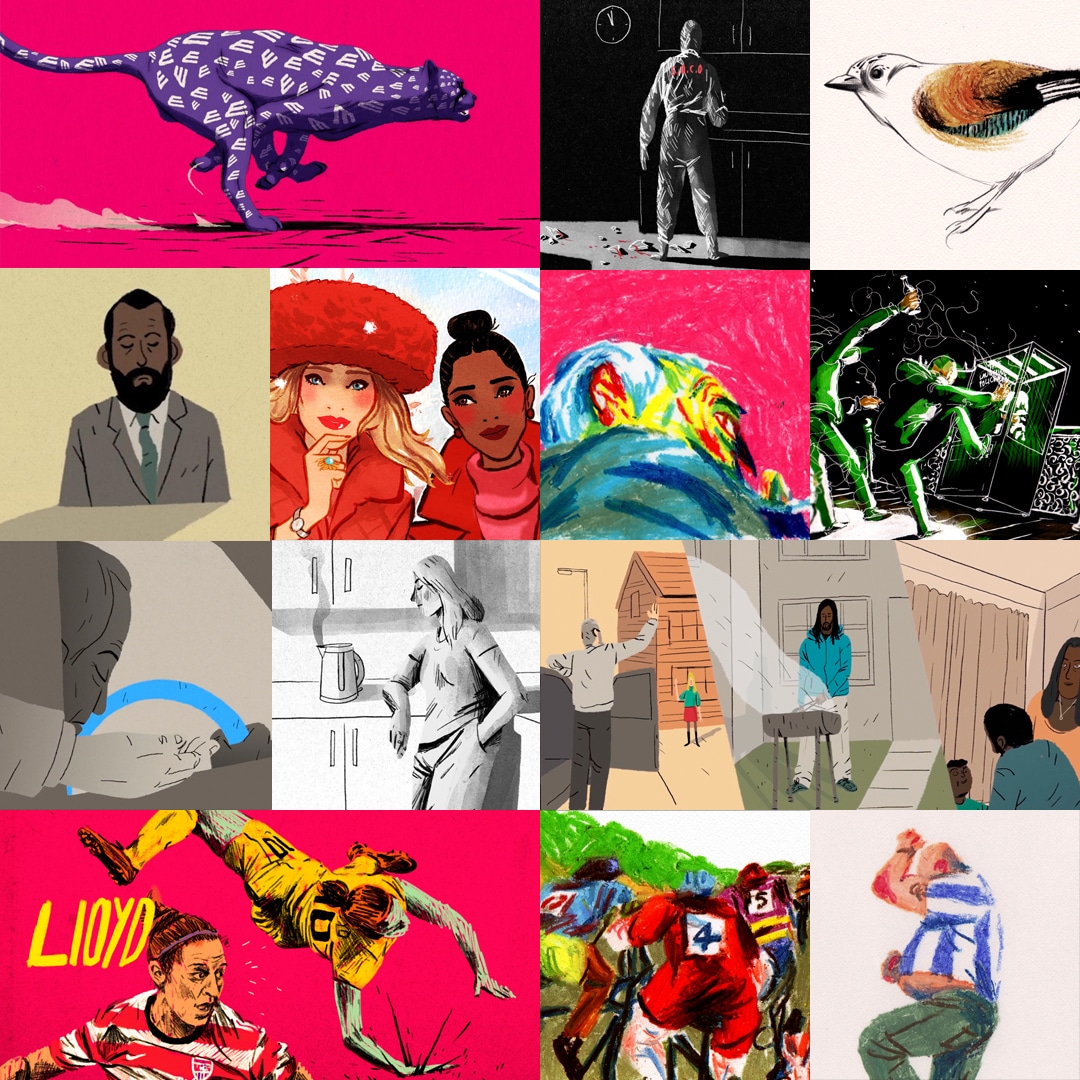 A BAFTA-nominated filmmaker, Marcus’ hand-drawn work employs bold colour and expressive motion, creating captivating visuals and thought-provoking stories. The diversity of his approaches can be seen in his commissioned work such as his animated sequences for the documentary LIMBO which premiered at SUNDANCE and in his award-winning, and BAFTA-nominated short film MY DAD, which explores inherited racism using a tactile approach of oil pastels and newspaper clippings. His recent film THAT YORKSHIRE SOUND draws upon his roots with a colourful and frenetic union of audio and image that documents a day of life in Yorkshire.

Marcus’s commissioned works include a collaboration with designer Izak Zenou for ESTÉE LAUDER, directing work on our Campaign for KEY and the beautifully realised 2D sequences in the Emmy-winning HERE WE ARE. 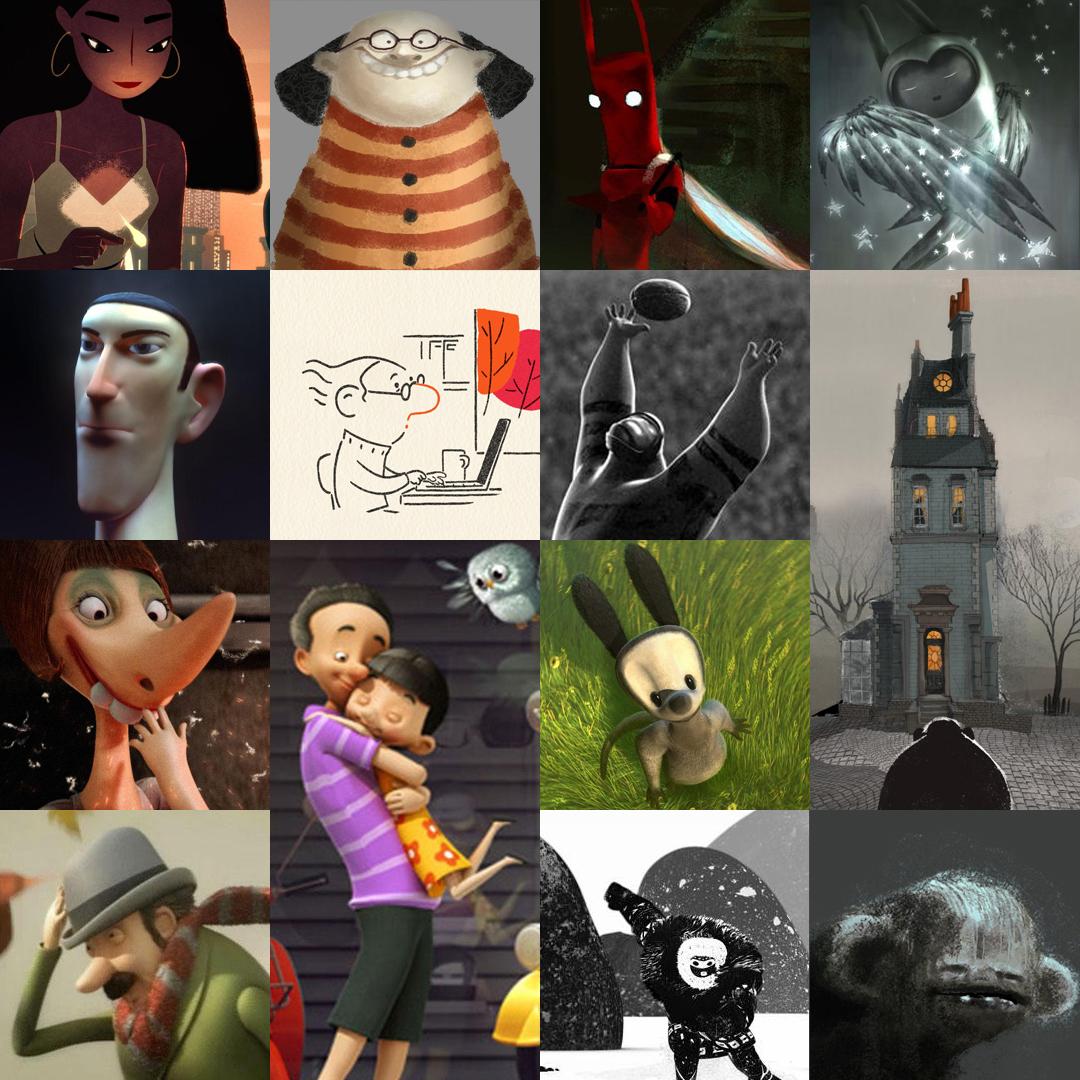 Marc has designed & directed a myriad of award-winning short films and commercials. His original micro-trilogy Pica Towers, inspired the BAFTA & Cartoon D’Or, winning 12 min short film JOJO IN THE STARS; and his beautiful half-hour film VARMINTS, nominated for a BAFTA & shortlisted for an OSCAR, was the winner of 27 Film Festival Awards.

Marc’s directing work includes titles for the BAFTA-winning BBC WINTER OLYMPICS, The GUINNESS idents for the RUGBY WORLD CUP, a stunning Christmas spot for OTTO, the classic THE BIG WIN ad for the National Lottery; and a whopping 48 ads for the LLOYDS TSB campaign – not to mention the subsequent launch film for the (now independent) TSB campaign. He recently Directed a seven-minute 2D animated sequence for the live-action Disney+ film GODMOTHERED, and is currently finishing up on a much-anticipated project slated to launch in 2022 … 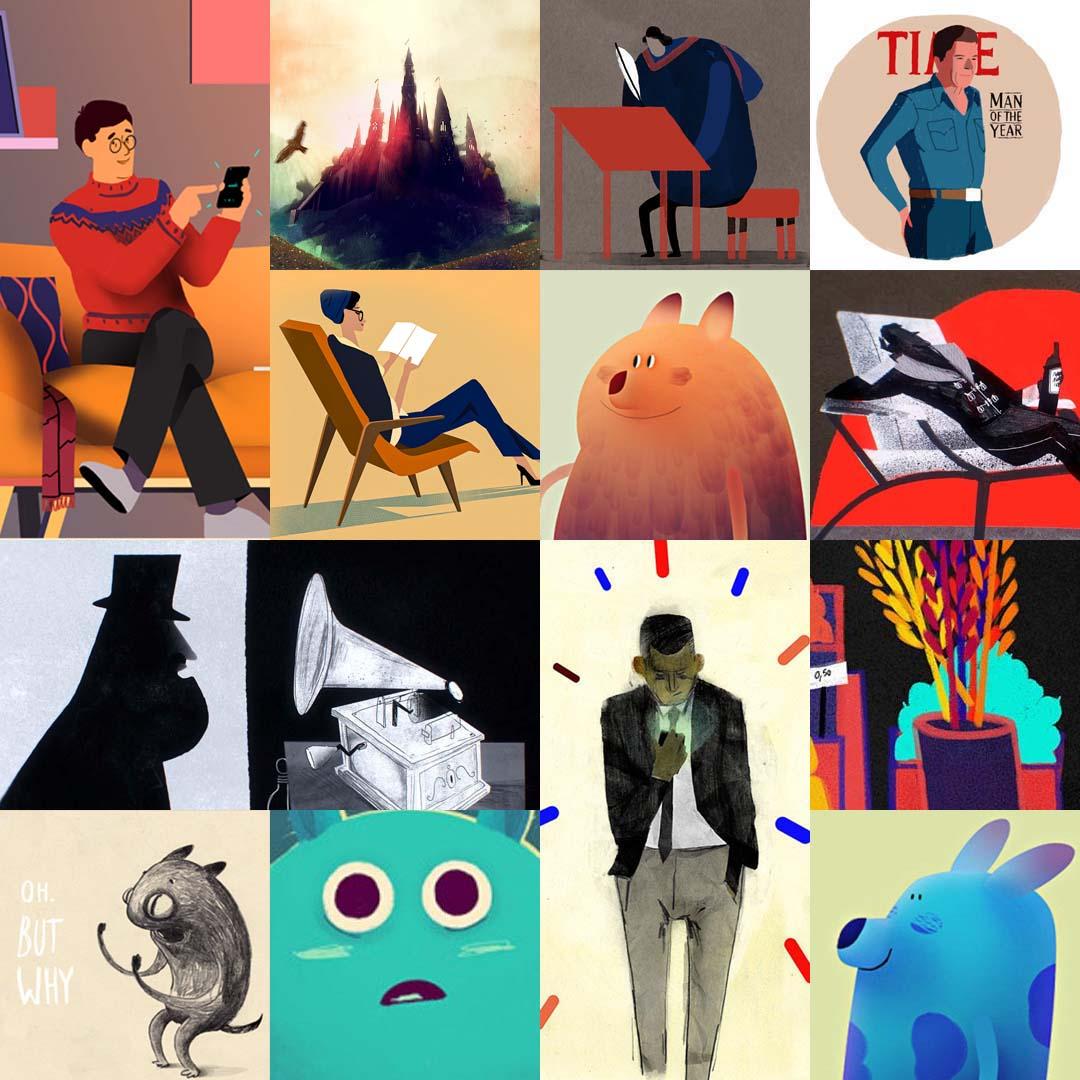 Gergely is an award-winning animation director who has made a name with projects across commercials, television and feature animation, building a formidable reputation and experience at some high profile and frankly awesome studios (including AKA). We are continually blown away by the work he produces.

Aside from his assured directing and art directing, Gergely is one of those rare people who can pivot around different axes, jumping between the more technical aspects of production and creative direction and production design. An underlying theme that permeates the work is a fascination with dark, moody and textural worlds and the challenges involved in exploring and bring them to life by whatever creative means best suit the solution, often merging different techniques into one cohesive universe. 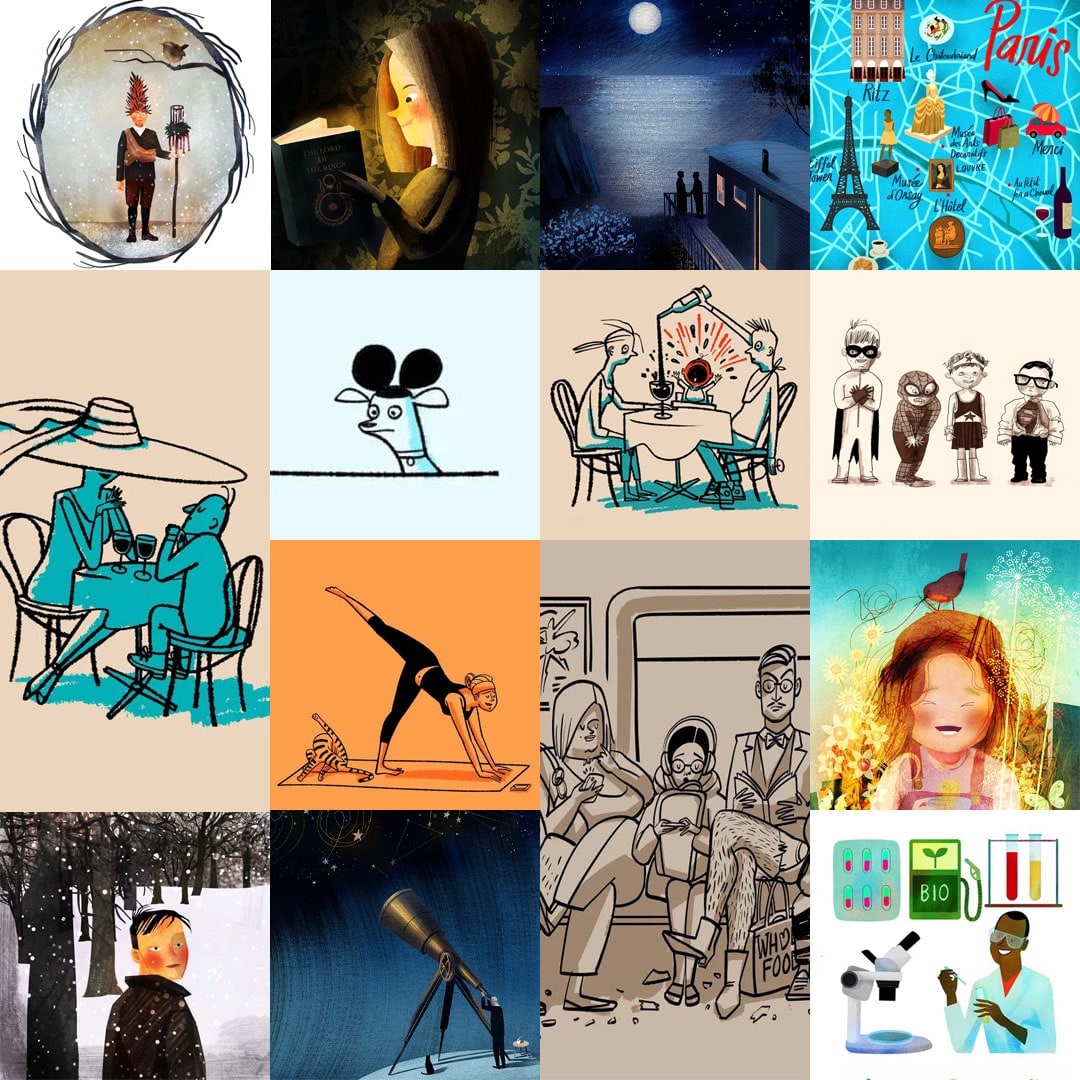 Born on the Northside of Dublin, Dermot is an artist, illustrator, and animation designer who works between Ireland and the United Kingdom. He has worked with a diverse base of high profile international clients, including Pentagram, Paramount, Apple, Disney, The New Yorker, The Guardian, Macmillan, Adidas, Vodafone, Vogue, HSBC, Christie’s, Harpers Bazaar, Winkreative, Canongate, Toyota Japan, Oxford University Press, UBS, The Irish Times, StudioAKA, Pernod-Ricard, and British Airways. His work has won numerous awards, including the Macmillan Prize for Children’s Book Illustration and a Silver Lion at Cannes Advertising Festival.

Highlights of his career include illustrations for Mary Portas’ report on the state of the British High Street; appearing on TV creating portraits of celebrities in chocolate, toast, and Marmite; being threatened with legal action for creating portraits of celebrities in toothpaste, production designs for a Disney film about a school for fairy godmothers, and illustrating a Christmas poem for Poet Laureate Carol Ann Duffy.

■Godmothered  ■Here We Are 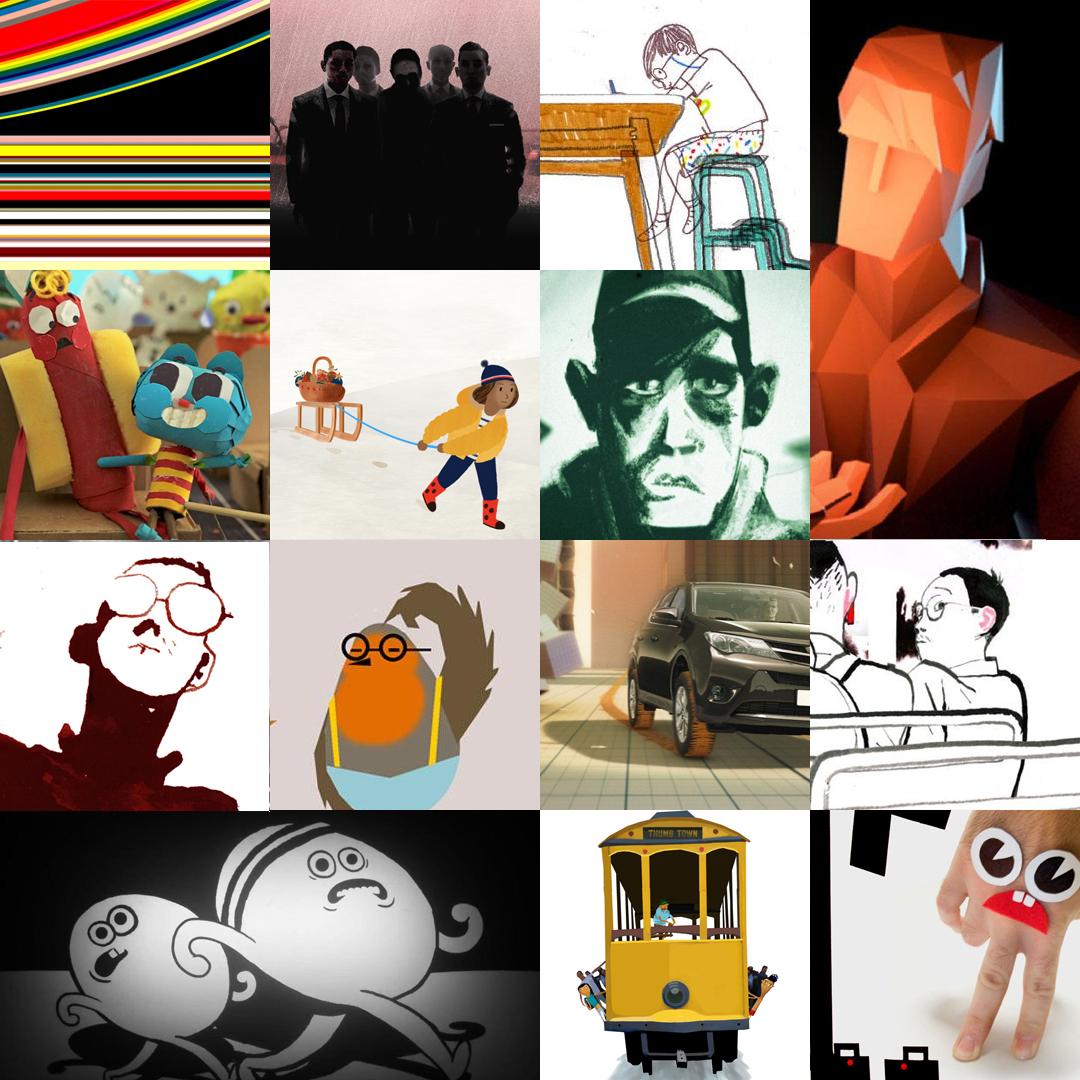 BAFTA-nominated Kristian Andrews’s films feature unconventional narratives and often use observational drawing as a means of communicating personal anecdotes, as typified at the outset in his RCA debut film ‘RABBIT PUNCH’.

Kristian’s diversity of work has developed across a range of projects – marking him as an adept director who can approach any problem with a fresh & unique perspective. Kristian’s film ‘LET’S PLAY NOMAD X’ is a three-minute parody of a type of YouTube documentary film and typifies this unclassifiable approach—as does his game development work on the wonderful BARBARA-IAN. 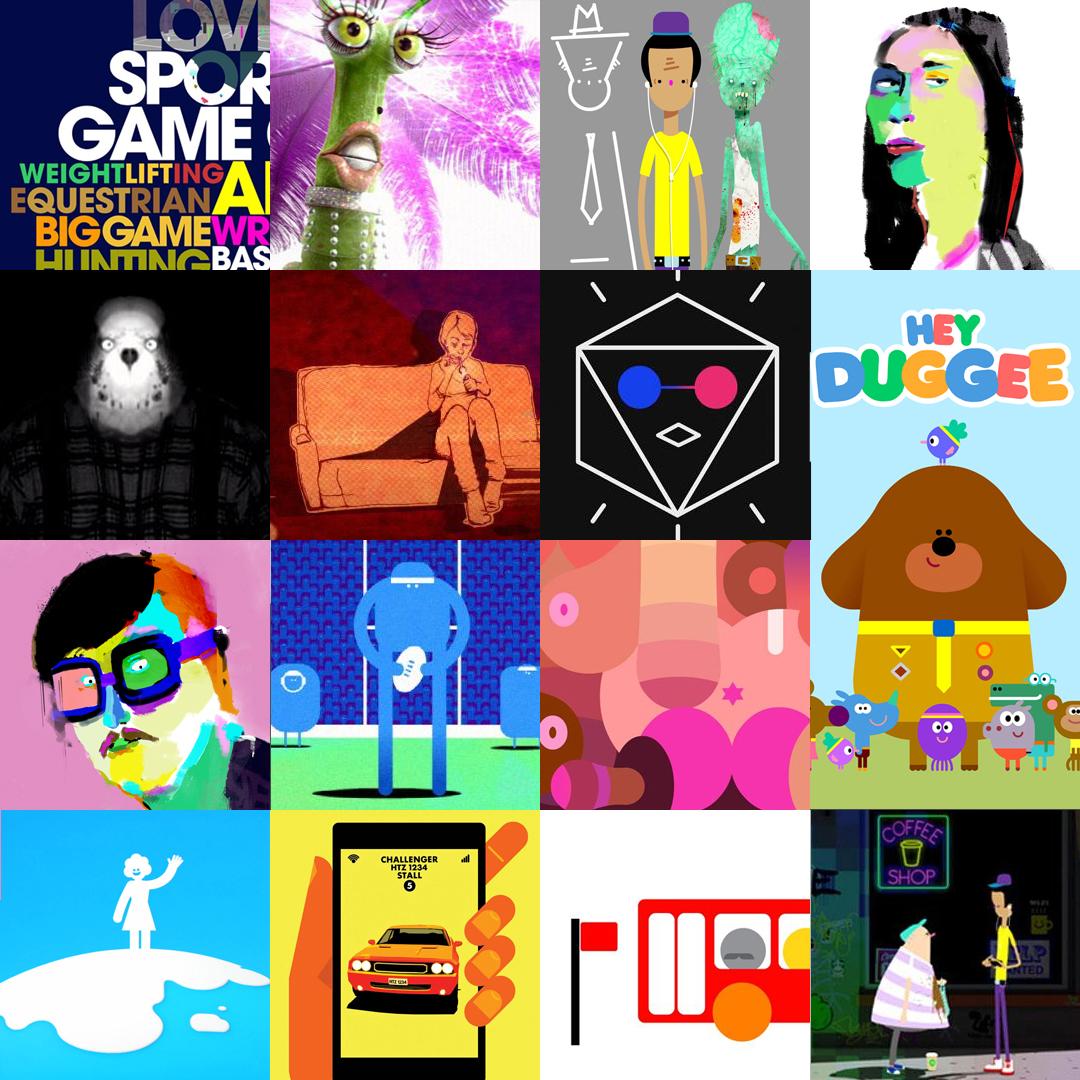 HEY DUGGEE, the hit pre-school series produced by Studio AKA for BBC STUDIOS. Currently, in production on its 4th series, the show enlists the warmth and charm of critically acclaimed comedian Alexander Armstrong who narrates the series alongside an outstanding cast of kids in the main roles.

Grant has a distinctive but wildly diverse approach to his craft. Alongside Duggee, he has created many striking TV spots, utilised all animation forms, and designed the title sequence for the Cartoon Network hit-show THE AMAZING WORLD OF GUMBALL. Having won two D&AD Awards for Interaction design, Grant followed his first animated short, WELCOME TO GLARINGLY, with a wry look at PARK FOOTBALL; which in turn led to the amazing LOVE SPORT series of short films based on sports. Grant’s acclaimed film A MORNING STROLL won a BAFTA, along with the animation award at SUNDANCE — and was nominated for an Oscar. What will he do next? 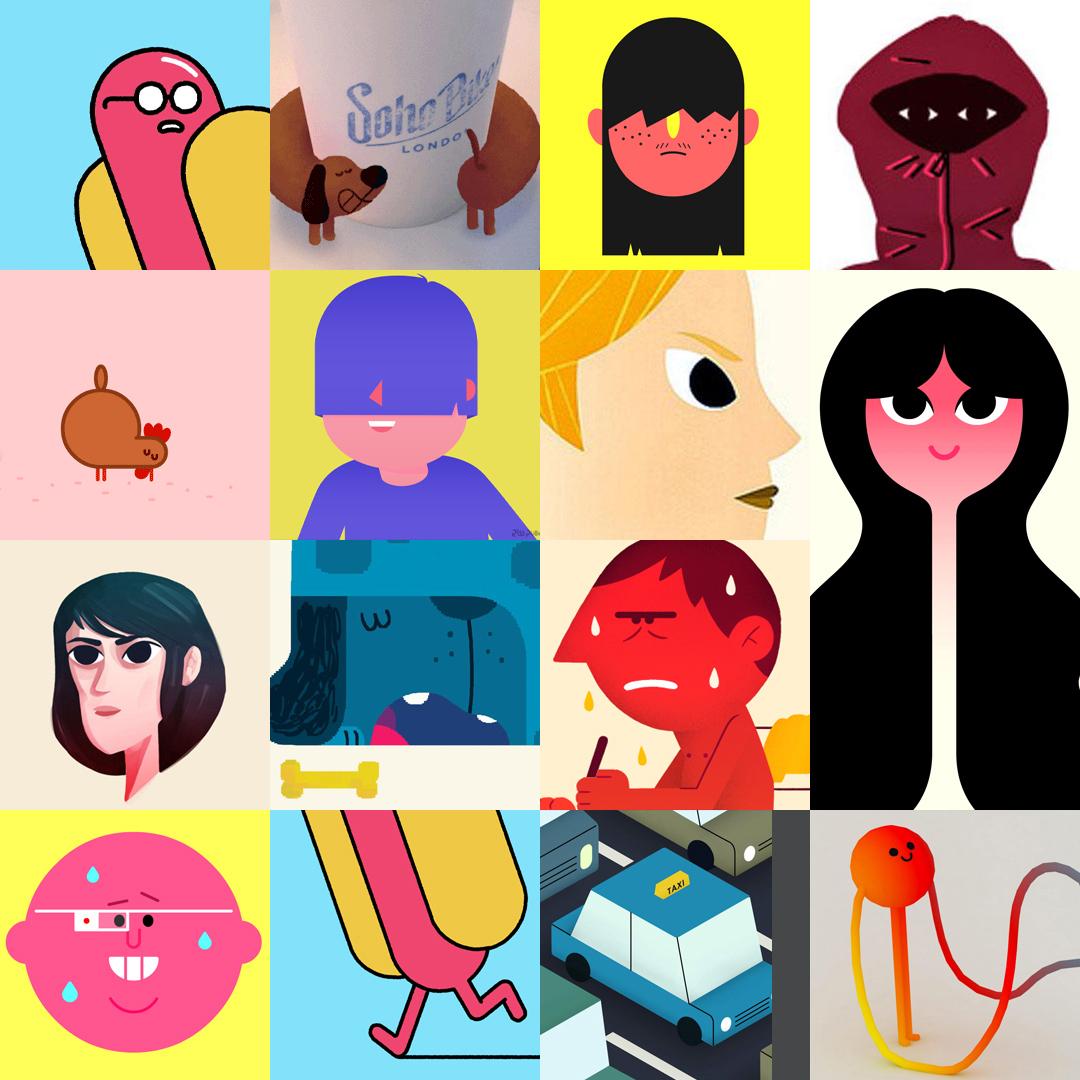 Ross is a designer and animator who loves creating characters in a simple, graphic style.

His characters have appeared on the Netflix series STORYBOTS, the front cover of Financial Times Magazine and as the backdrop to the ‘HELLO UNIVERSE’ exhibition at the Science & Media Museum.

As the HEY DUGGEE series designer since the outset, Ross has also lost count of the number of characters made for our hit pre-school show … can some one please count them?